How to Train Your Dragon Wiki
Register
Don't have an account?
Sign In
Advertisement
in: Plants, School of Dragons, Dragons: Rise of Berk,
and 3 more

"Alvin and the Outcasts"

The Bean is a cultivable plant appearing in the DreamWorks Dragons Franchise.

Black Beans or Black Turtle beans are a black variety of Common beans (Phaseolus vulgaris). They originate from America but they have spread worldwide.

There are a large number of varieties of Phaseolus vulgaris, including types of dry beans (of which the black bean is one), string or green beans, wax beans, shelling beans, and popping beans. Phaseolus vulgaris is by far the most widely known and cultivated bean species, and is likely what comes to mind when the word 'bean' is mentioned.

In both franchise and real life, beans are used as food or ingredients. They are one of the ingredients needed for making burritos, a popular Mexican food. They are important in some other traditional dishes as well.

One dish that beans are used for in the Franchise is the Dark Pumpkin Ensemble. Cooked during the Dreadfall holiday, four black beans, along with six pieces of black wool and twelve pumpkins, are required for its creation.

In a School of Dragons Farm Job, black beans are implicated - along with Mushrooms and Beets - as being used to make face paints for Dragon Racing.

Apparently, one Farm Job indicates that dragons can eat black beans, too. It indicates that "Astrid is looking for new feed for Stormfly." Another Farm Job asks for black beans, chicken eggs, and peppermint as "Hookfang isn't eating anything, and Snotlout is desperate to feed him something." It is also stated in Rise of Berk that beans are not very good for Gronckles, as they will react badly enough to destroy an entire house.

In the episode, "Alvin and the Outcasts", what appears to be a sack of dried brown beans appears in the background of the Haddock House, leaning against a pillar.

In the episode "Team Astrid", a sack of beans appears under the table, along with a sack of potatoes, of food that the Twins claim were "donated" from the fellow Hooligans whose homes were damaged in a Berserker attack.

Beans (even though green) are mentioned in the episode "To Heather or Not to Heather".

In the episode "Snotlout's Angels", the Dragon Riders, sans Snotlout, are gathered in the clubhouse eating supper. Astrid appears to be eating some sort of bean stew.

The black bean is a cultivable plant in this game. They cost 1 gem and its seeds cost 24 coins. They give 3 pods after 2 minutes.

Beans are mentioned in this game during the quest "Favors Among Friends", in which Meatlug accidentally destroys Fishlegs' house after eating beans.

A Bean Sprout is a seasonal decoration that was introduced in the game with the 1.48 update. It costs 50 Beltane Butterflies and requires 7 minutes to be built. 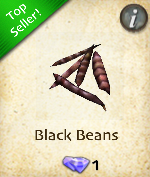