How to Train Your Dragon Wiki
Register
Don't have an account?
Sign In
Advertisement
in: Dragons: Rise of Berk, Dragons, Characters,
and 11 more

Bayana's Silkspanners are two young Silkspanners that appear briefly in the graphic novel, Dragonvine. One later appears in the game, Dragons: Rise of Berk.

Encounter with the Dragon Riders

Bayana's Silkspanners are among the many baby Silkspanners that the Dragon Riders encountered. When Toothless is about to be strangled by a dragonvine, the baby Silkspanners proceed to eat the plant and drain the dangerous toxin out of Toothless. They then travel to Dragonvine Island to stop the plants from spreading, and two of the Silkspanners form a bond with Bayana.

Both of Bayana's Silkspanners are very young in age. They appear to be young Short Wing dragons. They are larger than newly-hatched babies, being able to carry a full grown human standing on them, since Tiny Tooth dragons are about the size of a human infant. Both are the standard Silkspanner green. Their limbs are a greyish-purple in color, ending in hand-like feet the color of their bodies. 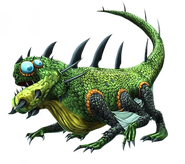