Bayana is a character who first appeared in the graphic novel, Dragonvine.

Both Dean DeBlois and Richard Hamilton, authors of Dragonvine were seeking to inject more ethnic diversity into the DreamWorks Dragons Franchise. The writers also floated ideas about tying in elements of Drago's story outside of the Barbaric Archipelago, specifically his conquests. Bayana and his tribe resulted from these ideas[1].

Richard Hamilton also wanted to add a character to the "team" with a personality that would complement the other Dragon Riders. He developed Bayana to have a "clear focus and a very clear view on things". Bayana's weapon of choice - bow and arrow - also displays this clarity because archers need good eyesight, as well as naming him "Bayana", which translates to "clear vision" or "clear sight" according to Hamilton[1].

Bayana's visual design is based on a female character artist who worked at Dreamworks, as well as referencing cultural items from African tribes[1].

Driven From His Homeland

Prior to the events of Dragonvine and possibly prior to How to Train Your Dragon 2, Drago Bludvist traveled far and wide to recruit soldiers for his dragon army. Those that refused were destroyed. Bayana and his tribe, were also approached, but refused to join Drago's army, especially as they wished to remain farmers and not soldiers. At their refusal, Drago destroyed Bayana's home and drove the people away. He and his tribe fled, eventually finding Dragonvine Island. Not long after settling down on the island, Bayana and his tribe learn about the deadly power of the dragonvine plant and intends to harvest it as weapons. However, this leads them in driving out the Silkspanner dragons that feed on the dragonvine.

Meeting Hiccup and the Dragon Riders

As Eret’s team head further into a Dragonvine forest, Bayana is sent by his people to watch over them. Eret becomes suspicious about the heavy-duty farming equipment that he found in the forest, and Bayana remarked how some of his people did not escape soon enough. Soon after, Eret can feel air coming out from a hole in the ground and have it filled with Barf’s gas before Bayana ignited it with a flaming arrow. When the group head underground, they discover that the root of the dragonvine is the skeleton of a Titan Wing Snaptrapper.

While the twins theorize on the origin of the dragonvine, Bayana tries to find a way out before finding Eret discovering the tribe’s secret Dragonvine plantation chamber. Eret and his team imprisioned in a pit filled with dragonvine, which causes Bayana to question his tribe’s intentions considering how the Riders are only trying to help them.

Soon enough, the other Dragon Riders return to rescue their teammates with the baby Silkspanners to help control the dragonvine’s population. When Bayana realizes that one of his tribesman tries to assassinate Hiccup with a spear, Bayana swiftly counted the attack with his arrow and he offers to help his people in training the Silkspanners as he has bonded with two of them.

Bayana has dark skin and black hair only pn top of his head, braided into dreadlocks. He is very muscular, possibly due to the harsh life of his tribe. Bayana has black dots painted on his forehead, chin and around his eyes, which could be a tradition among his tribe.

Bayana is an intelligent, proud, and skeptical person, especially since he and his tribe have been harassed, harmed, and driven from their home land by Drago Bludvist. He also doesn't give trust easily due to the hardships that he and his tribe had to went through. He does not believe Hiccup at first that Drago is no longer a threat, and he shows up to accompany Eret and the Twins, to make sure they don't discover their tribe's secret. He is loyal to his people, and would sabotage Toothless with dragonvine, thinking it was for their tribe's survival. However, Bayana is quick to realize the difference between the Dragon Riders genuine desire to help and that of potential enemies. He is also able to speak multiple languages, at least his own native tongue and Norse. He appears to have learned Norse by ear, picking it up when his tribe was attacked by Drago. 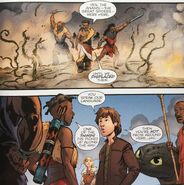