Bargemine is a Submaripper that appears in the game Dragons: Rise of Berk.

This Submaripper is a deep blue in scale colouration, with small lighter blue scales running along her back, under the spinal ridges. These are red, as are her wing ridges and horns, and, unlike many submarippers, seem to be somewhat frilly and seaweed-like in their shape. Her scales fade to grey at her claws, underbelly and midwings, giving way to vertical black stripes similar to those of a tiger. These stripes line her underbelly, underneath her tail and the tops of her wings. Bargemine also has a small, white strip along her chin: her eyes too are white. 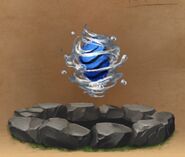 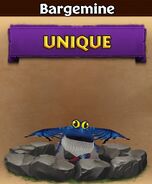 Retrieved from "https://howtotrainyourdragon.fandom.com/wiki/Bargemine?oldid=563783"
Community content is available under CC-BY-SA unless otherwise noted.