The Barbaric Archipelago is the setting for much of the DreamWorks Dragons franchise. The Archipelago takes place between the Greenland and Norwegian Seas.[1]

Dominated by water and littered by sea stacks, the Archipelago is a colony of more than 70 islands, according to Hiccup's map.

Due to its geographical location near the North, the Archipelago is inevitably cold. Berk is described to have snow for nine months of the year and hail the other three. However, a wide array of climates and landscapes exist throughout the Archipelago, from glaciers to steep cliffs, and waterfalls to volcanoes.

Valka's Mountain, for example, is a frigid, hostile cluster of spikes on the outside, and is surrounded by landscapes equally as remote and chilly. However, the inside of the Mountain is kept warm by natural hot springs, and several high-pressure air vents exist around the Mountain. Glacier Island, just south of the Mountain, also has a similarly chilly climate.

On the other hand, places like Dark Deep are barren, craggy, and rocky, with barely any ice or plants to begin with. Melody Island, on the other hand, is one of the few other islands to have dense, lush foliage.

Most islands are small and sculpted by sea waves, thus explaining its uneven cliff surfaces and numerous sea stacks. Due to the small size and thus proximity to the coastline, the formation of volcanoes and vents is rather common. Caldera Cay and Dragon Island are both active volcanic islands, and the Rookery has numerous hot springs.

The isles surrounding Berk, along with Helheim's Gate in How to Train Your Dragon 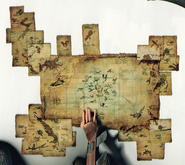 Hiccup's Map in How to Train Your Dragon 2

Hiccup's Map in How to Train Your Dragon: The Hidden World

Grimmel's map in How to Train Your Dragon: The Hidden World (recreation)

The Warlords' map of lands beyond the Archipelago (recreation)

Retrieved from "https://howtotrainyourdragon.fandom.com/wiki/Barbaric_Archipelago_(Franchise)?oldid=560193"
Community content is available under CC-BY-SA unless otherwise noted.