Baggybum the Beerbelly is Stoick the Vast's brother, and therefore Hiccup Horrendous Haddock III's uncle. His son is Snotface Snotlout. He is mentioned in the franchise as Spitelout Jorgenson, and as part of the books as a minor character. He is married to Fainting Freda. He stands up for Snotlout and pushes him to be chief many times.

The next day, after Thor'sday Thursday and the arrival of the Green Death, Baggybum and the other Vikings of the Hairy Hooligan Tribe and Meathead Tribe gathered to discuss ideas to rid Berk of the giant dragon. He was involved at yelling at the dragon, which failed, and later was seen discussing better methods of yelling. At that time, his own son Snotface Snotlout burgled the hairy underwear off of him as he stood talking. His knickers were to be employed in Hiccup's idea of feather-bombing the Green Death, as well as the Purple Death.

Baggybum, along with many Hooligans, set out to the Isle of the Skullions at the suggestion of Alvin the poor-but-honest-farmer, greedy for gold. His son, Snotlout, finds the treasure, unofficially suggesting that Snotlout is the true heir of the Hairy Hooligan Tribe. He argues with his brother Stoick on the way back to Berk about who should get the treasure and also get the Stormblade. The brothers fight. However, when their ship gets taken over by Outcasts, the brothers fight against their common enemy, back to back.

The Romans seek to stir unrest in the Inner Isles with a 'Fiendishly Clever Plan'. By kidnapping the heirs of the Hooligan tribe and the Bog-Burglar Tribe and blaming it on each other, the Romans hope to start a distracting war, so that they can capture all the dragons in the area. Stoick, having heard about this through Hiccup before he was kidnapped, tries really hard not to become angry and irrational and declare a blood feud with the Bog-Burglars. Big-Boobied Bertha, however, had no such foreknowledge, and boards Stoick's ship, The Blue Whale, to cause confrontation. Baggybum pipes up and hopes that Stoick bashes Bertha's face and nose and engages the blood feud. Ultimately, Hiccup, Camicazi, and Fishlegs crash-land on a desk in a Roman Observation Balloon.

As his name entails, Baggybum is very large. He is described as "about the size of a killer whale who hadn't had much exercise recently." in How to Be a Pirate. Images of him show a light-colored, almost fluffy-looking beard.

Baggybum appears to be a rather contrary brother to Stoick, but typically when advocating for his own son, Snotlout. 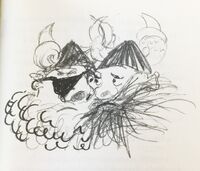 Retrieved from "https://howtotrainyourdragon.fandom.com/wiki/Baggybum_the_Beerbelly?oldid=773574"
Community content is available under CC-BY-SA unless otherwise noted.