The Auroch King is a male Buffalord appearing in the game, Dragons: Titan Uprising.

The Auroch King is golden yellow in color, the same hue as his eyes and scales of considerable size nested on his back. His body and wings boast variegated stripes of red, while the spines sticking out of his body, claws, and large horns are dark scarlet grey. 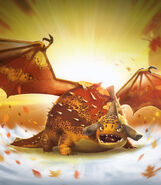 Retrieved from "https://howtotrainyourdragon.fandom.com/wiki/Auroch_King?oldid=433805"
Community content is available under CC-BY-SA unless otherwise noted.