Allows Astrid to train her combat skills against it

Astrid's Training Dummy is a piece of training equipment that Astrid Hofferson uses in the Berk Dragon Training Academy grounds.

Practice for an Outcast Attack

During the events of "Dangers of the Deep", Astrid uses the dummy to practice her moves against the Outcast Tribe attack later. She later beckons Snotlout down to join her, in an attempt to use him as another dummy.

By the events of "The Endless Night", the dummy appears to be rather worn out and battered already due to all the physical training used against it.

This wooden dummy takes the form of a thick pillar with a carved dragon head on its tip and numerous wooden protrusions along its side.These protrusions have metal tips and can revolve around the pillar. It has a set of retractable gears and a lever at the base, presumably to reset the dummy to specific forms. It appears that to start the spinning, you would have to crank the lever at the bottom. 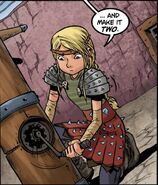 In "Dangers of the Deep" 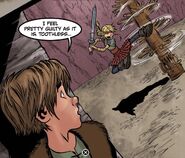 Worn out in "The Endless Night"

Retrieved from "https://howtotrainyourdragon.fandom.com/wiki/Astrid%27s_Training_Dummy?oldid=281071"
Community content is available under CC-BY-SA unless otherwise noted.