How to Train Your Dragon Wiki
Register
Don't have an account?
Sign In
Advertisement
in: School of Dragons, Characters, Humans,
and 11 more

Astrid's Mother is mentioned but not properly named in the DreamWorks Dragons franchise. She and her husband are finally seen in the third film.

Bequeathing her Axe to her Daughter

As stated in a deleted scene from How to Train Your Dragon, Astrid's Mother passed her Battle Axe on to her daughter, Astrid. Astrid was using this axe by the time she was 15 years old. This indicates that Astrid's mother was in part a warrior as well as a parent, as is with most vikings. In this, Astrid would take after her mother, being quite the warrior herself.

Loss of her Home

At some point during the episode "Team Astrid", Dagur attacked Berk, destroying several buildings, one of which was the house of Astrid's mother and father. Fortunately, the two were out at the Yak Races at the time and were perfectly safe. This event, however, spurred Astrid to form the Dragon Riders' Auxiliary to protect Berk at all times.

According to School of Dragons, Astrid's Mother is prone to insomnia and the only way to cure her is by getting some Lavender from Trader Johann to make a soothing tea.

Astrid's Mother wants to make her helmet more comfortable and asks for bunny fur to line it with.

She and her husband are first seen in the franchise very briefly when they duck out of the way of the Crimson Goregutter's tail toward the beginning of the film. They are seen again toward the end of the film, during her daughter's wedding. Only the back of her head is seen clearly, but she does turn around to face the crowd after the marriage is officiated. She can be seen smiling joyously and at one point raises her arms in celebration of the happy event.

Astrid's mother is stout with a round face and blonde hair of a shade slighly darker than Astrid's, separated into thick braids that hang over her shoulders. She wears a brown short-sleeved tunic and beige skirt, with a brown studded belt with a brass buckle and dark brown boots. Plain brown arm bracers cover her forearms, and she wears a brown fur shrug. A small Viking helmet sits on her head, and during the wedding she can also be seen wearing breast plates and a long green underskirt.

Though not referenced directly, it's implied that Astrid has a close relationship with her mother in the episode "Breakneck Bog", because she's the only one who deeply empathises with Hiccup's desire to find the gift from his long lost mother. In addition to this, Astrid is deeply concerned during "Team Astrid", on realising that when Dagur attacked Berk, her parents could have been killed. This even causes her to make excuses to stay on Berk, not wanting to leave in case her parents should be nearly harmed again whilst she wasn't there. 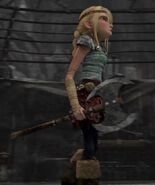 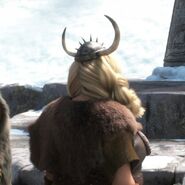 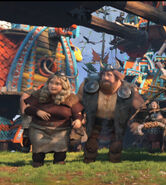 Astrid's parents are first seen ducking out of the way when the Crimson Goregutter swung its tail around while playing with Fishmeat. 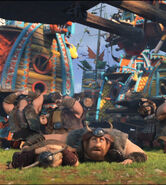 They do turn toward the viewer briefly during the wedding.