How to Train Your Dragon Wiki
Register
Don't have an account?
Sign In
Advertisement
in: Objects, Franchise Objects, Weapons,
and 3 more

Fighting and other purposes

"Have Dragon Will Travel, Part 1"

Astrid's knives are a pair of knives that were a gift to Astrid Hofferson from Hiccup Horrendous Haddock III in Dragons: Race to the Edge.

At the beginning of "Have Dragon Will Travel, Part 1", Hiccup is seen giving Astrid two knives to hold onto. Later in the episode she brings forth these knives as a stand to so as to secure the Dragon Eye in place, while Stormfly uses her flames to light it.

The knives also make an appearance in "Family on the Edge" when Astrid suspects that Dagur is a spy and threatens him with them.

In "Gruff Around the Edges" Astrid immediately arms herself with her knives when she is abruptly woken from her sleep by Tuffnut and Ruffnut, using the Thunder Ear as a mega-horn. 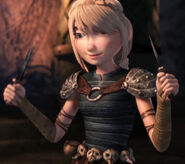