How to Train Your Dragon Wiki
Register
Don't have an account?
Sign In
Advertisement
in: Objects, Franchise Objects, Weapons,
and 8 more

Shortly before How to Train Your Dragon 2

Astrid's Axe is an axe that acts as Astrid's main weapon as an adult.

Following the end of the Dragon Hunter War and the final battle at Berserker Island in "King of Dragons, Part 2", Astrid switched out her old axe with her new one.

Astrid's new axe makes its first appearance in How to Train Your Dragon 2 when Astrid attempts to threaten Eret and his men after she and Hiccup land on the Dragon Trapper's ship. Prior to this scene, her axe appears to be strapped to Stormfly's saddle, and Astrid has to resort to using a stick as an alternative weapon.

After Hiccup throws a net over Astrid, he ends up taking her axe away from her and hands it over to Eret. Astrid has her axe with her until she and the other Dragon Riders get captured by Drago Bludvist and his men.

Astrid seems to have regained her axe at some point during the capture by Drago, as a year later, it makes another appearance. As Astrid and the others attempt a rescue mission to free some caged dragons on a boat belonging to the Warlords, she appears on the boat holding her axe. Then, as their stealth mission backfires and they begin to fight the boat's crew, Astrid uses her axe with skill accumulated through all her years of axe-fighting, wielding it skillfully to hold back the dragon trappers whilst avoiding actually killing them. Astrid does not use her axe in the final battle against Grimmel, as she cannot carry it with her whilst wearing her flight suit.

Astrid was shown to have reclaimed the axe in The Serpent's Heir.

Astrid uses her axe against frenzied Silkspanners. Hiccup lights it on fire with Nightmare Gel, scaring off the dragons. Astrid’s flaming axe also matches Hiccup's flaming sword in the title.

Astrid is shown using her axe in the minigame Dragon Tactics. She also used it in her battles against Nikora Stormheart and her army.

Unlike her old axe, which Astrid inherited from her mother,[1] this double-edged axe has a longer shaft covered in fur and two metallic dragon heads on each side of the knob. One of the heads appears to resemble a Deadly Nadder while the other looks like a Night Fury. Tying the axe heads together for decoration are six strips of pink and blue leather: two across the middle and a pair of straight ones either side.

The initial designs also included a leather strap tied to the knob. 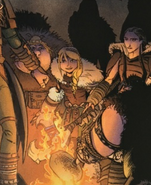 In The Serpent's Heir 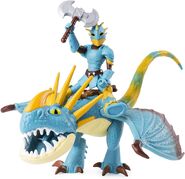