Askari of Ashes is a member of the Dragonroot Company and one of the antagonists of the game Dragons: Titan Uprising.

As part of Maeve's plan to destroy Berk, Askari went to Dragon Island and used dragon root on the wild Crimson Death residing there. He then escaped the giant dragon and traveled through the Burning Barrens, creating havoc among wild dragons.

At one point, Askari met Snotlout and realized he must have come after Bjarke told the twins about an army being built. He threatened the boy by telling him Maeve's intentions to destroy Berk and rule the Archipelago.

After Snotlout defeated the Crimson Death Askari poisoned, the hunter realized that Berkians were much more powerful than he and his allies had thought. Still hoping that Maeve's plan would work, he returned to his leader.

Askari is a thin, yet muscular man, with a strong upper body. He has dark brown eyes and thin brown eyebrows. He appears to be bald, but wears a metal helmet with a twisted horn on each side and a mask that covers his entire face, except for the eyes. He has two white stripes painted on his face and mask. He wears clothes made from Zippleback skin and two metal shoulder pads with lots of spikes on them.

Askari has a continuous hatred for dragons and the Isle of Berk, and he will do anything to destroy the latter. He likes to taunt and mock his enemies, often pretending to be intimidating. He is shown to be very hopeful and optimistic as he still believed Maeve's plan to destroy Berk would be successful, even after he was defeated.

Since the moment they met, Askari recognized Snotlout as a Dragon Rider from Berk and started to threaten him. Askari and Snotlout mocked each other every time they met. After Snotlout defeated the Crimson Death that Askari used dragon root on, the Hunter began having some respect for his enemy. 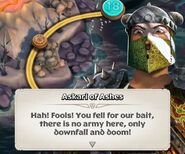