Riding Dragon of the Ten Companions of the Dragonmark

With the Dragon Rebellion

During the Second Dragon War, they were hired by Furious to assassinate Hiccup Horrendous Haddock III as they and Furious share a similar reason as to why they joined the Dragon Rebellion, both of them having once loved a human dearly yet eventually losing that human as a result of other Vikings. Yet when they tracked Hiccup to Prison Darkheart, they found his bed abandoned as Camicazi had just tried to smuggle Hiccup out of the prison. When they did finally find him, Arrogance, Innocence, and Patience also found he was wearing Fishlegs' lobster-claw necklace, and thought he was Fishlegs. They told Hiccup the story of the necklace while Hiccup tried to get them out of a trap. Later, when they rescued Fishlegs, they became his riding dragon.

Since then, Shadow has been a part of the Companions of the Dragonmark.

Hiccup opts to stay and find Fishlegs, and orders Camicazi to take Eggingarde back to her mother. The next morning, Hiccup's helmet is found, forcing him to reveal himself to Alvin and the Witch. They forced him to look for the Jewel in his Sand-yacht, the Hopeful Puffin 2, which Camicazi hid herself in. To their dismay, Hiccup is kidnapped by the invisible Deadly Shadow and is about to be killed by it.

A dragon trap activates, trapping the Deadly Shadow. Hiccup frees the Shadow, but the Monster of Amber Slavelands takes him to its lair. Deducing the monster is related to the Burrowing Slitherfang, Hiccup plays dead in order to strike the Monster at its weak spot in the middle of its head. After killing the Monster, Hiccup discovers the Jewel in its lair, along with a half-dead Fishlegs.

After the Deadly Shadow rescues them, Valhallarama once again attacks Hiccup and the gang and takes both Hiccup and the Jewel to Alvin and the Witch. In the Prison, the Witch tries to convince Valhallarama to surrender the Jewel and Hiccup, but she remains silent. She explains her past Questing career and her Quest to find the King's Things and also gives a speech about Hiccup's cause, ending it by placing the Slavemark upon her head and renaming it the Dragonmark. A fight ensues between the Company of the Dragonmark (the slaves) and Alvin's army. The Dragon Rebellion joins them and chaos erupts. The Company of the Dragonmark retreats to the Bog-Burglar Islands as Hiccup tries to rescue Toothless and the Wodensfang from Alvin. He succeeds, only to have Alvin steal the Dragon Jewel from him. As Hiccup and the gang retreat to their secret hideout, Hiccup discusses his failures with the Wodensfang and about Furious's words he will bring dragons to their final oblivion. The Wodensfang comforts Hiccup and tells him it will be alright, but secretly wonders if Hiccup is right. He looks to the stars and decides he has to trust Hiccup and hope for the best.

Arrogance, Innocence, and Patience hid along with the rest of the Companions of The Dragonmark: Hiccup, Camicazi, Fishlegs, Windwalker, Stormfly and Toothless in the very beginning of the book in Termagant's Underground Treehouse in the Murderous Mountains, which Termagant made when she was a little girl.

Arrogance, Innocence, and Patience are light green with yellow spikes on their neck and claws and bright red eyes. However, Arrogance is the darkest green and has the longest horns, while Innocence is the lightest and has the shortest.

Each head has a specific personality. Their names were given to them due to their personalities.

Innocence: The left-most head, very compassionate. She cares for Fishlegs the most throughout the books.

Patience: The middle head. Spares Hiccup when he sees the lobster claw necklace. He is named quite appropriately as patience is what he has to have in order to deal with the other two heads.

Arrogance: The right-most and most violent head of the three. Tends to block all emotions for friends. 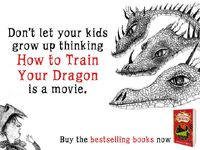 Retrieved from "https://howtotrainyourdragon.fandom.com/wiki/Arrogance,_Innocence,_and_Patience?oldid=753911"
Community content is available under CC-BY-SA unless otherwise noted.