How to Train Your Dragon Wiki
Register
Don't have an account?
Sign In
in: Animals, School of Dragons

Yes (No in real life)

The Arctic Fox has made its only appearance in the game School of Dragons.

The Arctic Fox (Vulpes lagopus) is a species of fox that lives in the cold climates of the Arctic circle, meaning that it would likely have been seen by historical Vikings. It is extremely well adapted to the cold, with thick fur and small ears to trap in heat. It's insulation is so strong that the fox only starts to shiver at -70°C. The Arctic Fox's coat changes with the seasons. During the colder months, the fox's coat is thick and white, while the coat is thinner and more brown in the summer months.

The shedding of an arctic fox's winter coat is exemplified in a Farm Job in which Trader Johann asks the player for some fur.

An Arctic Fox's diet consist mainly of lemmings and bird eggs, but they also hunt birds, rodents, fish, and seal pups. They also eat berries and seaweed when lacking other food.

A Farm Job in School of Dragons indicates foxes (presumably inclusive of the Arctic variety) will eat bearberries.

While in the Game School of Dragons Arctic Foxes are kept as livestock to harvest their fur. In reality, Arctic Foxes are not domesticated or kept in any way or purpose,except perhaps for zoos.

As in the game, Arctic foxes are coveted for their fur in real life. Unfortunately, this involves hunting or trapping the foxes, killing and skinning them: therefore, this is illegal in many countries. In School of Dragons, collecting fox fur is presented in a much more humane way, andfur is collected simply by "harvesting" shed fur.

A School of Dragons Farm Job asks the player for fur, in addition to other items, to craft paint brushes and orange paint. While in reality a number of animal hair or fur may be used for paintbrushes, arctic fox fur is not one of them, being far too soft a texture.

Other uses in School of Dragons include material for pillows and winter coat lining. It can be thus presumed that in the game, Arctic Foxes shed a lot of fur, or there are a lot of them, as this amount would be needed in order to line coats and make pillows.

Arctic Foxes are an animal exclusive to the Icestorm Island Expansion Pack. The player must have purchased this expansion or be a member in order to unlock this animal. Players can harvest one clump of fur from one fox and use them to complete "Jobs" from Trader Johann's Job board. 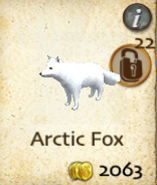 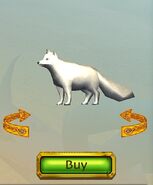 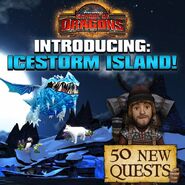 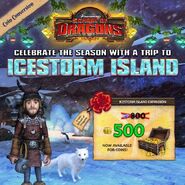 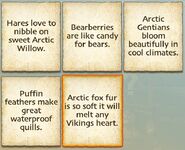