How to Train Your Dragon Wiki
Register
Don't have an account?
Sign In
Advertisement
in: People, Cast and Crew, Real Life,
and 12 more

Ferrera is the youngest of six children who were born in Los Angeles, California, to parents who immigrated to the United States from Honduras in the mid-1970s. Ferrera's mother divorced her father and raised her and all of her 5 siblings by herself. She worked as a housecleaning staff director for a Hilton hotel, and always stressed the importance of higher education and learning to her children.

Ferrera was raised in the Woodland Hills section of Los Angeles, where she attended George Ellery Hale Middle School and El Camino Real High School. From the age of seven, when she landed a small role in a school production of Hamlet, Ferrera knew that she wanted to be a performer. She acted in school plays and community theatre in Los Angeles throughout her youth, though with little help from her mother, who insisted that she pursue other interests because she was concerned her daughter would encounter difficulties breaking into the industry. Ferrera was forced to take the bus to auditions, though eventually her mother saw her daughter’s dedication and began to drive her. Ferrera disliked her first name as a child and went by her middle name, "Georgine", until she began acting professionally. 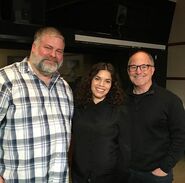 In an interview with Jay Baruchel 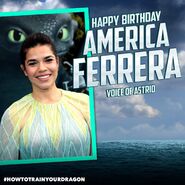