Indigo and purple with green bumps
Crimson and pink
Green

The Abomibumble is a hybrid between a Gronckle and a Monstrous Nightmare that first appeared in the game, Dragons: Titan Uprising.

Abomibumble eggs are black with raised purple spots, making it appear as if it is purple with black spots.

Abomibumbles, like their Gronckle forebearers, have four legs, multiple bumps on the back and tail, and a rounded face with a blunt nasal horn. These dragons also possess two pairs of short horns on their head and single claw-tipped wings — both of which are inherited from the Nightmare parent.

Its physical appearance remains mostly the same, except it's much larger with minor differences. Its horns become larger and pointier, scar-like markings are visible on its lower jaw, and it appears wiser, giving it a serious expression. It also seems that the bumps on the tail become sharper with stripes that have an appearance of cracks.

The Abomibumble is able to produce lava blasts that explode on impact. These blasts can be powered up through the use of pockets of swamp gas.

Abomibumbles possess durable bodies of the Gronckle, making them capable of withstanding attacks better than most other species. Despite their "legendary laziness", their stamina seems comparable to that of other dragons.

Abomibumbles make use of their tails to swat opponents with great force.

Most, but not all, of these hybrid individuals tend to take behavior traits from their Gronckle parent. Abomibumbles are generally seen as 'lazy', sleeping large portions of the day away in a sunny spot or wallowing in mud. They are also quite amicable and social, even to the point of associating with known enemies like Dragon Trappers for a pat. Most individuals tend to be fairly gentle, and usually take a protective or defensive role in fights.

The Abomibumble was first introduced in this game, along with many other dragon hybrids. The only way a player can obtain an Abomibumble is by breeding a Monstrous Nightmare and a Gronckle in the Breedery.

The Abomibumble was introduced in this game in September 2020. 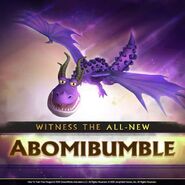 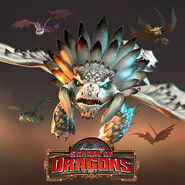