AJ Kane is the voice actor of young Hiccup Horrendous Haddock III in How to Train Your Dragon: The Hidden World.[2]

AJ tours the country with his mother Alexandra and an unnamed father, both of whom also work in the entertainment industry. He started his career at age 4 as a model for children's magazines and toy packaging, soon followed by television commercials. His first big role was on Saturday Night Live in 2018, during the skit The Day You Were Born. He is currently doing many voices over jobs for projects due for release in late 2018 and 2019. In his spare time, AJ enjoys wrestling and American football and has won many medals for both. His older brother, Pierce, is also an actor, and younger brother, Blake, is being introduced to acting as well. AJ currently lives with his family in Newtown, Pennsylvania. 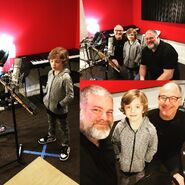