I've been lurking on the wiki a long, long time now. I've used your meticulous research, fact-finding, and overall fandom to help shape my contributions to the game. I'm a huge fan of the franchise, and nothing has made me happier than to make this game with you guys in mind.

The Dragons themselves - the petting, the crossbreeds, the biographies - that's for you guys. I just wanted to thank you all personally, finally, now that I can, for this wiki, and helping me try and make this something you will enjoy.

Do you have an Android link?

Alright then, thank you for all the answers.

I have an iOS device, but unfortunately live in the US. From what I've seen, graphics look good and I like that it is a puzzle game - that seems a little different than other dragon games.

Personally, I am not in to hybridizing disparate dragon species (my inner biologist is cringing). I also realize I am in the minority, since fans have been theorizing and drawing mixed species for ages. Just wondering, why choose hybridizing dragons over adding new species? Seems there is still lots of room to expand species. The "gotta get'em all" mentality is also popular (me included!). Will there be an explanation in the game's story line as to why Hiccup/Berk would need to breed dragons at all and explain how the hybridization is able to happen, since it has not been evidenced as possible in the Franchise so far? Will "Titans Rising" take place before, during, or after the third movie? It the 'Draft token' an in-game currency like runes are in "Rise of Berk"?

Thank you so much for taking time to talk with us directly, and offering the limited release - I hope someone here is able to take advantage of it!

Adding new species is something we've often left to DreamWorks, we "met in the middle" somewhat with the breeding.The decision was partly due to this, but also because (as you mentioned) we did see clear signs in the fan community that pairing Dragons and breeding them was in high demand. I was a big fan of this system in Fallout Shelter, myself, and I thought it would be a fun mechanic to add while allowing us to create "new species" from already existing ones.

As for the game-lore aspect of this: crossbreeding is NOT limited to Berk. They are encountered in the wild, and Fishlegs even points it out when you first encounter one, shocked. We'll see what the Riders (especially Fishlegs, who is CRAZY curious like yourself about this) discover to answer this very big question. But I will make sure it's clear this is not Vikings designer-breeding Dragons. I don't think that's something Hiccup and the gang would ever do for their own benefit.

I know, there are conflicting opinions on crossbreeding on genetic levels, but after I saw a zonkey and a liger... yeah I accepted that nature was stranger than I gave it credit for.

For timeline: Titan Uprising falls after HTTYD2 but before Hidden World, in the same "universe" as Rise of Berk, so to speak (meaning we will always be as true to the franchise as we can, but are "parallel" to the "real world" of HTTYD.)

Ah! And a question I'm very excited to answer, as it provides some good context for big fans like us in the game:

Draft Tokens are used to obtain Dragons from Berk, without breeding, hatching, or rescuing them in the wild. The way Draft works is, you're a member of the Berk Dragon Academy, and a Draft token gets you a random Dragon from the communal pool of Academy trained Dragons. It ties into our leveling system:

When you Level Up your Dragons, you select up to ten to donate to the Berk Academy for other trainers to learn with or adopt as their own. The more Dragons you donate, the more your own Dragon Levels Up from the shared experience gained by Trainers learning with your Dragons.

I mean, sure, it's clearly a game mechanic haha, but I'm a HUGE HTTYD fan, and I really, really wanted to push the sense of community within Berk and with other trainers - so that's how I've decided to explain our leveling system and Drafting. I never wanted it to just be "oh you level up with other Dragons" - I always wanted to encompass a purpose behind this, especially one that I felt fit: helping other Trainers in the Academy.

In short: Draft Tokens are simply a token you receive to get a Dragon from this community pool of the Academy Dragons. We still have the usual Runes as our base currency (along with Gold/Fish for more minor costs).

I know on your main page for the game (thanks, btw, you guys are fast) it talks about "Releasing them", which was an early discussion for the level system which I'm looking to update with my above explanation once I find out where it's being revealed as such.

I am warming up to this game now :D

Okay, good to hear that the hybrids aren't going to be like "Viking Designer breed dragons" and absolutely it wouldn't be something Hiccup et al would do! Also good to hear that there will be a bit of a story about them and their discovery as being naturally occurring.

Draft Tokens - I gotta make sure to sign up now! I like this idea of the "communal pool of Academy trained Dragons". It makes sense, since all dragons on Berk supposedly have minimal training to get along with the Vikings, as far back as the very first episodes of "Riders of Berk". Like getting potty-trained! Totally makes sense to have some of the Berk community dragons receive extra training, and for Academy students to learn dragon training with many different dragon types than just one single personal dragon.

On the Wiki's page for Titans Rising - PLEASE let me know if there is inaccurate info! We try to get factual info for the Wiki, and references, too. From what I understand, the bit about the "releasing" of dragons may have come from the FAQ for this game that Ludia put up a couple days ago? Specifically these:

So, after finally getting the chance to see the game in action, I have to say most of the models (or, to be more exact, the some I got to see) are marvelous. That Boneknapper model is the best I have ever seen in any game. The Skrill looks pretty good too, though it walks on 2 legs. 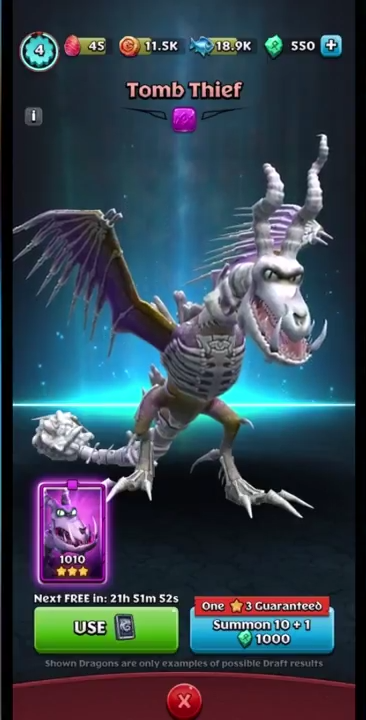 I'll definitely do a pass and make sure you guys get the proper lore-friendly info for the wiki, since that's our main focus here. I'm talking to my lead about providing you guys high-res images of each crossbreed (since you won't get any from any show) as well as all of their biographies and write-ups (which I'm happy to say are DreamWorks approved :))

so glad you like them! As mentioned above, I'd like to ensure you guys get all the individuals to add to the site. I can't think of any others who would be as excited about them as the people on this wiki!

In this comment I'm really just nitpicking, so you don't have to answer.

Sources says that there will be a total of 100 dragons in the game, including the hybrids and all. But my question is, will there only be dragons from the Movies/TV shows/Book of Dragons short, or will dragons from Rise of Berk appear too?

There are dragons in Rise of Berk that are evidenced to exist in the Movies, but don't appear on screen (at least physically, some do as drawings), such as the Sliquifier and Submaripper (Ripwrecker in RoB).

Moreover, there are actually 64 species introuduced throughout the franchise, before HTTYD 3 (59 in the movies and tv series, and 37 solely in the movies) which if you wanted to add all of them, ("every flight-capable Dragon species from the core franchise will appear as either an ownable Dragon, or a boss or mini-boss") would leave very little space for hybrids. So either you would have to leave out a larger amount of dragons, or there's only a smaller number of possible hybrids.

^^ Wow, that would be amazing! So far, it appears we only have one editor that is able to access the limited release game.

Not sure if this is your department or if you could pass it along, but one little thing I noticed from the images already being uploaded to the Wiki is that the Skrill's face is hidden behind the small "card-looking" insert. I don't know if the dragons in this view are able to be rotated or not, but it would be nice to see the Skrills' faces :)

^The dragons on that mode have little animations, so at one point, the Skrill's face can be seen. I saw that on YouTube.